Gökçeada (Imbros) is famously home to the most virgin beach of the Aegean and Mediterranean region, Gökçeada Surf Hotel is located along the southern shore of this magnificent island, on beachfront property adjacent to the astonishingly beautiful, 2 km long Kefalos shoreline, where the sea meets the Salt Lake.

The Kefalos seacoast is situated along an Agean wind tunnel effective year-round. The offshore winds cool the temperatures and helps circulate oxygenated air, providing fresher breathing air to its inhabitants. The same wind tunnel also provides unique opportunities for windsurfers and kitesurfers to practice their crafts.

Across from the hotel facilities is the Salt Lake, which serves as a stamping ground to various exotic bird species including flamingos and wild mallards, offering the wildlife a seasonal home.

*The etymology of the name ‘Imbros’ dates back to the Luwians, the oldest known residents of Anatolia and the Aegean islands off the Anatolian coast. The origin of ‘Imbros’ comes from ‘Im(a)ura’, a compound word consisting of ‘ima’ and ‘ura’ in the Luwian language, meaning ‘the Great Mother Goddess’. The term was adapted to the Hellenic language as ‘Imuros’, and eventually became ‘Imbros’.

Gökçeada Surf Hotel was constructed and furnished using only the finest, most natural materials. Our facilities were designed using modern and traditional architectural concepts, and with utmost respect for the environment.

Situated on Kefalos Beach, the windsurfing center of Imbros, our establishment is - 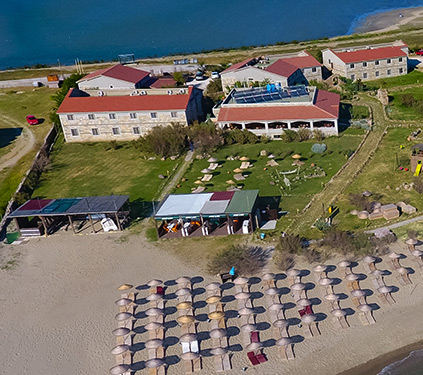